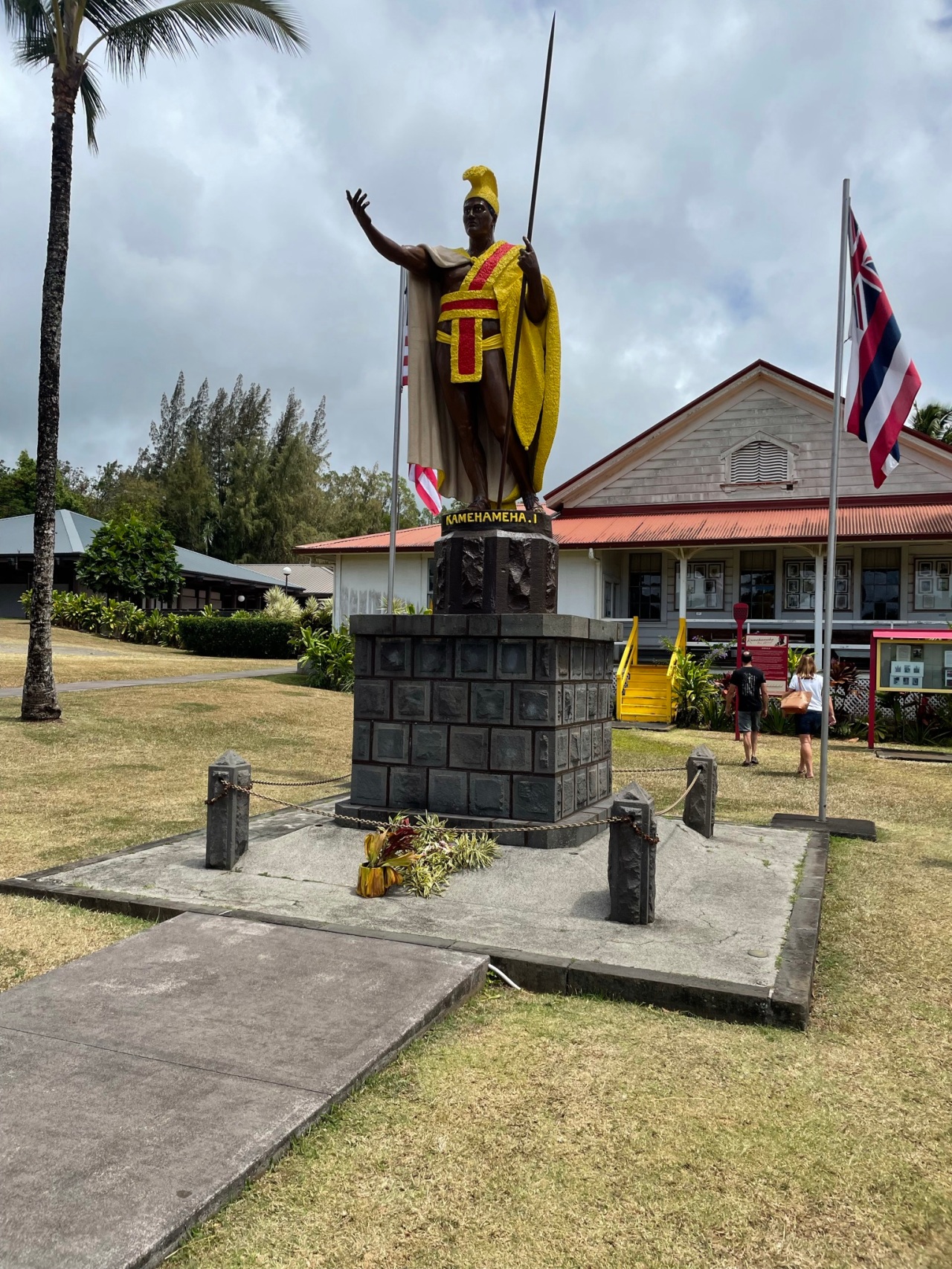 The kids left on Monday and we changed condos.We are now in Ali’i Villas. This is a gorgeous condo, just down the road from the previous one. Since there are only three of us now, we did not need all the room of the other one. This condo is right on the water instead of across the street. Because of the rocks here, swimming is not as accessible, but the view is spectacular.

Yesterday, we toured the Kohala area on the north end of the Big Island. Kohala is where Kamehameha was born. There is a statue of him in front of the civic center. The statue has a long history. It was commissioned for the 100th anniversary of Cook’s arrival in the islands. After casting in Germany, it was transported to Hawai’i, but on the way, the ship carrying it sunk and the statue feared lost. The Hawai’i government used the insurance money to commission a new statue, not knowing that the first one had been found by fishermen. It was eventually returned to Hawai’i, but by tht time the new one arrived and was placed in front of the Judiciary in Honolulu. The first one was then placed in Kohala. You can read the details here:

The weather was so clear, we could see Haleakala on Maui from the road to Kohala. We left Kohala and stopped at Keokea Beach. To get to the beach, you take a narrow windy road with a steep grade. The beach, itself, is not that great for swimming, but the cliffs surrounding it and the waves breaking on the rocks make for some stunning views. While we were there, a pair of local spear fishermen emerged from the water, each wit a stringer of large groupers, parrot fist, and some others we couldn’t identify.

From Keokea, it was a short distance t the end of the road on the other side of Waipi’o valley.

This is the head of the Pololu Trail that takes you to the beach. After reading the warnings about so many ways to die, we decided not to take the trail. We did see other folks, however. One woman was carrying an infant who could not have been more than a few weeks old. I hope they all survived.

Our last stop befoe coming home was Spencer Park—a beautiful spot near a sacred area. The park, like Hapuna Beach Park, is well-maintained with showers, tables, and ADA accessible paths. I imagine beaches are really hard to negotiate for the handicapped, but both Hapuna and Spencer how thatsomebody gave some thought to the problems.

Last night’s sunset from our lanai was another great spectacle.