The Eyes Of Texas

At last we have a cover and a pub date for The Eyes Of Texas, an anthology of short stories edited by Michael Bracken and published by Down and Out Books. The pub date is October 21, 2019. 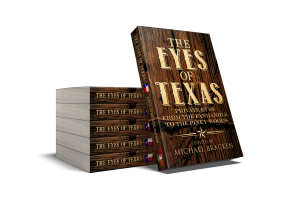 My story, “Shaft On Wheels” introduces former Dallas cop and former bull rider turned private eye, Colt Colton. The story takes place in central Texas and Houston where Colt, in the days following Hurricane Harvey, is hired to track down the owners of some vehicles that were abandoned in the storm. Colt wades into the cleanup efforts after the storm and discovers lust, incest, adultery and murder buried in the mud and debris..

You can read more about the anthology here: The Eyes Of Texas Press release

The release date, October 21, 2019 is only one week before Bouchercon in Dallas. I hope to get together with some of the other authors. Perhaps we’ll even be able to sell some books.