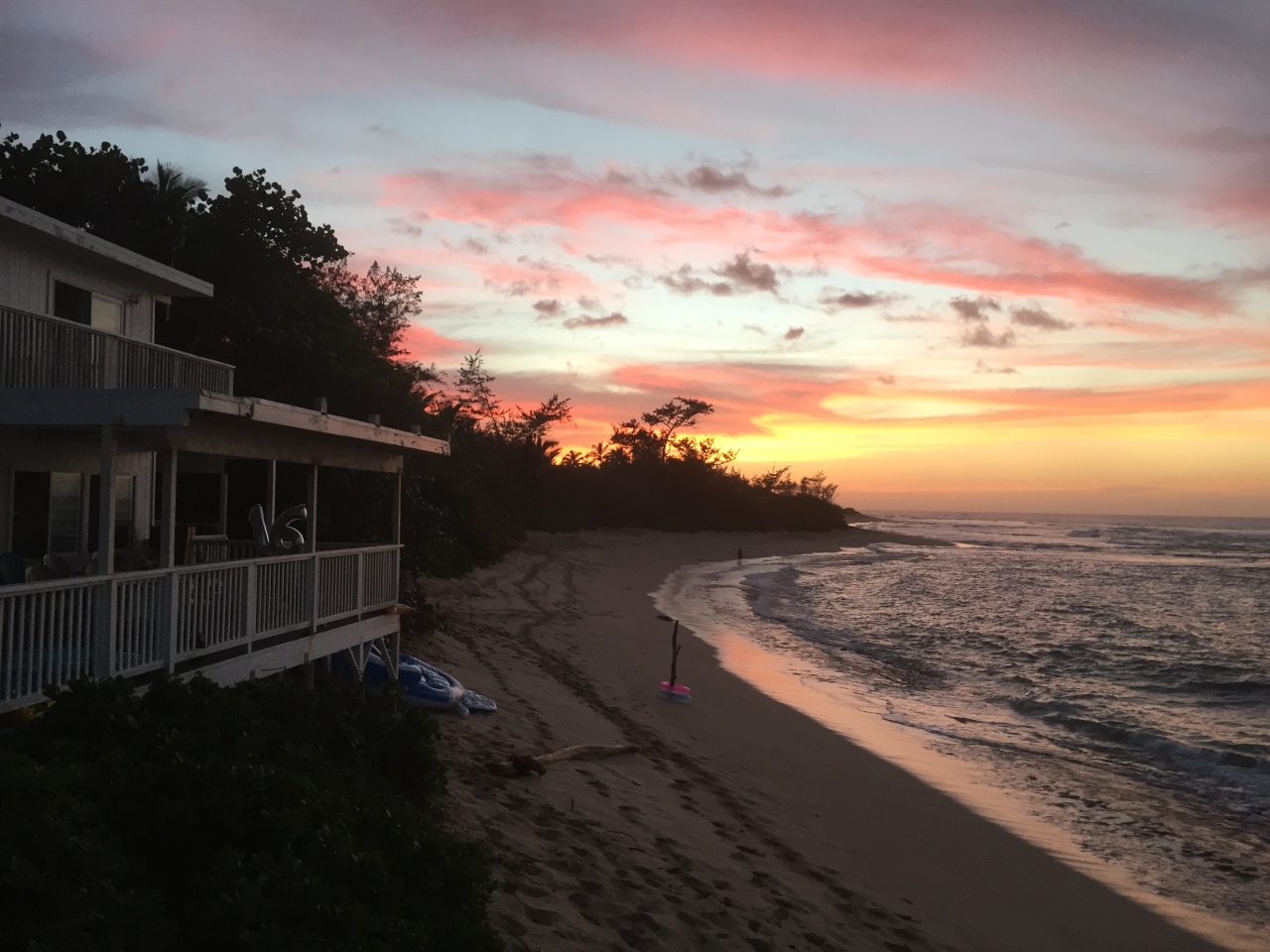 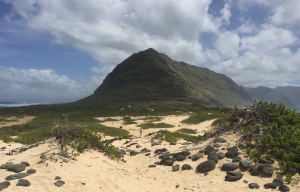 Just down the road from our cottage in Mokuleia is Kaena Point. It is the farthest point on Oahu, where the North Shore meets the Leeward Coast. It is a wild place with driving winds and crashing waves, In the old days, a railroad went through linking the North Shore sugar plantations with the Leeward side and beyond to Honolulu. Now, the only evidence of the railroad are the remains of bridges spanning a few gulches. There are no paved roads and only four-wheel drives with special permits are allowed. About three miles in, the unimproved road becomes impassable for all vehicles. It is not possible to go around the point except by foot.

The area has been designated as a nature preserve to provide a breeding area for protected species such as Laysan Albatrosses, Hawaiian monk seals, and other shore birds. In 2011, the state constructed a predator fence around a large section of the point to keep out dogs, cats, and mongooses, which threaten the nesting sites of shore birds. 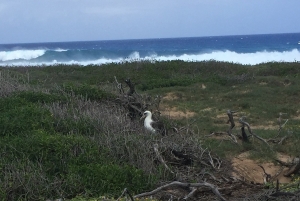 A Laysan Albatross calls to her chick at Kaena Point

Kaena Point is popular place for hiking, fishing, getting close looks at the endangered species. The hike is well worth it, but challenging. In Hawaiian, Kaena means “the heat.” Hikers need to bring plenty of water and sunscreen. In the 70s and 80s, before the point became a nature preserve, a foot-race, called the Oahu Perimeter Relay went through Kaena Point.

The race was run by teams of seven. Each team had two vehicles to transport the runners between legs. The total distance around Oahu is 140 miles. Each leg of the race was about 3 miles, with the longest leg being the one that went around Kaena Point, a distance of about 7 miles. Teams started at different times based on their estimates of when they would reach Kaena Point. The idea was to reach it at dawn because you did not want to run it in the dark. You could die. The two cars were needed because the team had to split at Waialua, with one vehicle and several runners going on to Kaena point and the other vehicle going over the mountains to the Leeward side to meet the runner coming around the point. I did the race three times and got to run the point once. It was a grueling, challenging race.

From September 1943 to July, 1944, the 100th Infantry and the other units of the 442nd Regimental Combat Team, saw some of the most intensive fighting in the Italian campaign. The 100th landed at Salerno with 1300 men. They fought through the Volturno River, Monte Cassino and the Gustav Line. From there they went to Anzio where they were joined by replacements from the 442nd and took part in intensive fighting that ended with the liberation of Rome. Sadly, the Nisei did not get to enter Rome with the other Fifth Army units. Instead, they were sent to Civitavecchia, northwest of Rome where the 100th was joined by the other units of the 442nd.

In July, 1944, the 2nd and 3rd battalions took the city of Pisa. During August of 1944, the Nisei held the area from Pisa to Florence. On September 1, the Allies crossed the Arno River. The 2nd and 3rd met heavy resistance and took many casualties, while the 100th crossed almost unopposed.

Shortly after arriving in Italy with the 442nd, near Molino a Ventoabbto, he repeatedly advanced alone taking heavy fire from the Germans and despite being wounded by a grenade. He continued to fight until his platoon had taken the crest of Hill 140. He recovered from his wounds and returned to the front lines where he was wounded again, this time by a land mine near San Mauro Cilento, and died five days later.

Poke has been called, by some, the hamburger of Hawaii. Go to any party, barbecue, or other gathering and someone will bring poke. Go to any supermarket deli, or corner convenience store and you will find poke. It’s served as an appetizer, a side dish, or sometimes a main dish. It was one of the uniquely Hawaiian dishes we were really looking forward to on our return to the Islands in March. What we were not prepared for was the incredible variety of poke that we found. When we lived there in the 80’s, there was only one kind of poke, prepared with essentially the same ingredients. Any variety came from the combination of those ingredients by different preparers. Our first visit to the deli counter in Times Supermarket in Kailua was a shock. There were over thirty varieties of poke. 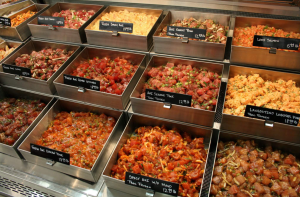 So what is poke? Poke is a Hawaiian word meaning to cut or chop. Fresh ahi tuna (yellow fin tuna) is what is cut, diced, into small cubes. Add some chopped sweet onions (Maui onions if in Hawaii, otherwise Vidalia onions). Mix the ahi and onions with sesame oil, soy sauce, and, if you have it, some limu—a kind of seaweed. Stir it and let it rest, but not too long. Poke should be eaten fresh-made.

That’s the basic kind. Frankly, it’s how I prefer it. However, we found it fun, even exciting to try all the different kinds and they are many. The species of fish is the main variation. Poke can be made of swordfish, salmon, mussels, octopus, fish roe, and even avocado. Then there are the different ingredients. Kimchi instead of onions, for example. Wasabi, sriracha, vinegar, or pepper-infused oils add different flavorings. Gotta say that the very best place we found for poke was at the Sack n Save on Farrington highway in Nanakuli.

So, for that next tailgate event, instead of slapping some ground meat patties on the grill, just poke up some fresh tuna and onions for an ono (delicious) treat.