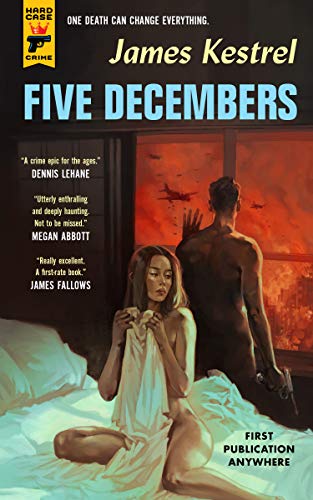 The location is Honolulu, Hawai’i, the date, a few days before Thanksgiving, 1941. The discovery of the bodies of two young people, one, the nephew of the top admiral in Hawai’i, the other, an unidentified young woman, gives Honolulu Police Detective Joe McGrady his most challenging case. The story is set against the lead-up to the attack on Pearl Harbor. The whole country knows war is imminent. What McGrady doesn’t know is how the deaths of these two people affected the cataclysm that follows.

McGrady gets a lead on the killer, but is unable to learn the identity of the young woman. He tracks the killer through the Pacific to Hong Kong where he arrives the day before the Japanese invade and conquer the territory. McGrady is taken prisoner, but is befriended by a Japanese official who helps him identify the young woman and the reason for her death.

McGrady rides out the war in Tokyo where he witnesses the carnage that US air raids inflict on the populace. He also meets a beautiful woman who changes his life. Returning to Honolulu after the war, he is able to get his old job back, but learns that the case that sent him to the Pacific, has been closed. McGrady, however, believes the killer is still at large and continues to work the case on his own, sparking the ire of his superior.

Once again McGrady returns to Hong Kong to confront the killer and obtain justice for the two young people. He finally completes his mission in the dead of winter, five Decembers after taking on the case.

Five Decembers is a gripping story of heart-rending love and devotion in a time of inhumanity and destruction. It is wrapped around a skillfully written tale of murder and espionage. Kestrel masterfully recreates the setting and atmosphere of pre-war Honolulu and the Pacific. This is an absorbing novel that you will not want to put down and which you will revisit again and again. It will be released in October by Hard Case Crime. It is available for pre-order now on Amazon. A reminder that this year marks the eightieth anniversary of the attack on Pearl Harbor. This book makes a valuable contribution to the literature of that era.

Like a summer heat wave, the new season of Guns + Tacos is on us. July saw the launch of season three, episode 13, Two More Tacos, a Beretta .32, and a Pink Butterfly. Dave Zeltserman delivers all the noir and all the carnage readers have come to expect from the series while twisting our emotions into tight knots,

“Lance was the guy to call whenever there was an ugly, festering problem that badly needed lancing.”

That was how he got his moniker. The festering problem? A botched job by a low-level hit man that left a witness in the wind. Lance’s job is to find the witness and eliminate her. All he has to go on is that she is blonde and has a pink butterfly tattoo on her butt cheek. Lance sets an elaborate trap to catch the pink butterfly, but, when he does catch her, what does he do with her? Lance’s solution heats up the streets of Chicago. Once again, everybody’s favorite taco truck purveys the weaponry that gets the action started. Dave Zeltserman has crafted a story that you can’t put down. The twist at the end is both satisfying and disturbing. From Down & Out Books. Also available on Amazon. Do yourself a favor and get the whole season.