Long-time Hawai‘I resident, Jim Nabors has passed away in his Diamond Head home. He was 87. The Star Advertiser has the story.

Nabors moved to Hawai‘I in 1978 when he purchased a macadamia nut and flower plantation in Hana Maui. He was already a huge television star, best known as Gomer Pyle, first on the Andy Griffith Show and later on his own show, Gomer Pyle, U.S.M.C. His portrayal of Pyle made him into a staunch advocate of the Marines, who, in turn, bestowed on him honorary promotions to Lance Corporal, Corporal, and Sergeant.

During his long career, he appeared often on Carol Burnett’s specials. He also headlined several holiday shows from Hawai‘I and, in the late 1970’s appeared in the Polynesian Extravaganza at the Hilton Hawaiian Village Dome for ten months out of the year.

Waterfall on the Hana Highway

Hana is a small town on the east coast of Maui. It is reached by way of the famous Hana Highway, a 64 mile narrow, cliff-hugging road from Kahului that puts the white in white knuckles. The drive takes 2.5 to 3 hours without stops. There are approximately 620 curves through lush tropical rain forests. The highway crosses 59 bridges (54 according to the song), 46 of which are one lane. The views are spectacular. You cross tumbling steams and pass cascading waterfalls on one side. On the other are steep cliffs and gorgeous ocean views. The speed limit is 25mph on most stretches of the highway, though some places it drops to 15. Not that anybody would dare to speed with all of those curves.

The rule on the one lane bridges is that the first car to the bridge has the right-of-way. There are some stretches where the road itself narrows to one lane and, in those places, the etiquette holds that the vehicle on the uphill side backs up to a spot where the other can pass. 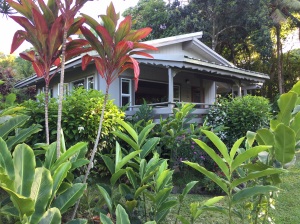 Hana’s attractions are quiet and solitude. We stayed in a one room cabin in the midst of a tropical plantation, surrounded by flowering trees, plants, and myriads of birds. The location was so remote that had no WiFi and no cell service. In order to make a call we had to drive to the middle school and call from the parking lot.

Hana has a beach park, which is a gathering place for local families and canoe clubs. Other than that, there is not much to do in Hana. 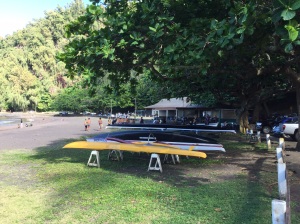 Continuing beyond Hana, you come to Hamoa Beach, a crescent shaped silver and black beach lined with Hala trees. James Michener called it the most perfect South Pacific beach which happens to be in the North Pacific. The beach is open to the ocean and the surf can be rough, which makes it popular for surfing. We didn’t have a board, but the waves broke close enough in that we could swim out and body-surf. If you’re not a surfer, it’s a great place to relax on the sand

The battle for the Gothic Line in the Appenine Mountains continued through April of 1945. On April 7, the 2nd Battalion pushed toward Belvedere. The enemy they faced was the Kesselring Machine Gun Battalion, a crack force. Sergeant Yukio Okutsu single-handedly knocked out three machine gun nests and captured four Germans at the the third one. That action broke the deadlock and, by nightfall, the ridge was in 442nd hands.

From April 9 to April 18, the 442nd continued to push northeast, taking town after town. They had to scale 3000 foot cliffs and battle entrenched Germans who had been ordered by the Fuhrer to hold at any cost. Finally they reached the town of Aulia and Mount Nebbione, which was heavily defended by the Germans. The Aulia road was the last remaining escape route to the Po Valley for the Germans.

The 442nd attacked on April 21. Private Joe Hayashi, of 3rd Battalion, K company, near the town of Tendola, single-handedly silenced three machine gun nests before being killed while perusing more Germans. On a fortified ridge named Colle Musatello, 2nd Lieutenant Dan Inouye led his men against two machine gun nests. Though shot in the stomach and he continued to lead his men on. He crawled to within ten yards of a third machine gun nest. Rising up to throw a grenade, he was struck in the arm by a rifle-fired grenade, which nearly severed his arm at the elbow. As his men rushed forward to help he ordered them to keep their distance, because his now dead hand clutched a live grenade. He prised the grenade from his hand and threw it left-handed at the machine gun, taking it out, and then charged the nest, firing his Tommy gun left handed and killing the occupants. Inouye wasn’t done. He continued leading his men until hit by another round, this time in the leg, which ended his fight.

Aulia fell to a 442nd pincer attack on April 25. The Germans surrendered in the hundreds. Two weeks later, on May 7, the war ended with Germany’s surrender.

Through the Gothic Line/Po campaign, 101 Nisei died and 874 were wounded. The 442nd was awarded Presidential Unit Citation signed by Dwight D. Eisenhower, which read, in part,

“. . . In four days, the attack destroyed positions which had withstood the efforts of friendly troops for five months. . .[The Combat Team] accomplished its mission of creating a diversion. . . which served as feint for the subsequent breakthrough of the Fifth Army forces into Bologna and the Po Valley. The successful accomplishment of this mission turned a diversionary action into a full scale and victorious offensive, which played an important part in the final destruction of the German armies in Italy. . .”

Yukio Okutsu joined the Army in March 1943 and volunteered for the 100th Infantry Battalion.

Technical Sergeant Yukio Okutsu distinguished himself by extraordinary heroism in action on 7 April 1945, on Mount Belvedere, Italy. While his platoon was halted by the crossfire of three machine guns, Technical Sergeant Okutsu boldly crawled to within 30 yards of the nearest enemy emplacement through heavy fire. He destroyed the position with two accurately placed hand grenades, killing three machine gunners. Crawling and dashing from cover to cover, he threw another grenade, silencing a second machine gun, wounding two enemy soldiers, and forcing two others to surrender. Seeing a third machine gun, which obstructed his platoon’s advance, he moved forward through heavy small arms fire and was stunned momentarily by rifle fire, which glanced off his helmet. Recovering, he bravely charged several enemy riflemen with his [[submachine gun]], forcing them to withdraw from their positions. Then, rushing the machine gun nest, he captured the weapon and its entire crew of four. By these single-handed actions he enabled his platoon to resume its assault on a vital objective. The courageous performance of Technical Sergeant Okutsu against formidable odds was an inspiration to all. Technical Sergeant Okutsu’s extraordinary heroism and devotion to duty are in keeping with the highest traditions of military service and reflect great credit on him, his unit, and the United States Army.

Daniel Inouye served as a medical volunteer during the attack on Pearl Harbor. In 1943, when the prohibition against Japanese-Americans serving in the armed forces was relaxed, Inouye volunteered for the 442nd. He served in Italy where he was wounded. Following the war, he entered the Territorial legislature. After statehood, he was elected to congress as a representative and then as a senator.

Second Lieutenant Daniel K. Inouye distinguished himself by extraordinary heroism in action on 21 April 1945, in the vicinity of San Terenzo, Italy. While attacking a defended ridge guarding an important road junction, Second Lieutenant Inouye skillfully directed his platoon through a hail of automatic weapon and small arms fire, in a swift enveloping movement that resulted in the capture of an artillery and mortar post and brought his men to within 40 yards of the hostile force. Emplaced in bunkers and rock formations, the enemy halted the advance with crossfire from three machine guns. With complete disregard for his personal safety, Second Lieutenant Inouye crawled up the treacherous slope to within five yards of the nearest machine gun and hurled two grenades, destroying the emplacement. Before the enemy could retaliate, he stood up and neutralized a second machine gun nest. Although wounded by a sniper’s bullet, he continued to engage other hostile positions at close range until an exploding grenade shattered his right arm. Despite the intense pain, he refused evacuation and continued to direct his platoon until enemy resistance was broken and his men were again deployed in defensive positions. In the attack, 25 enemy soldiers were killed and eight others captured. By his gallant, aggressive tactics and by his indomitable leadership, Second Lieutenant Inouye enabled his platoon to advance through formidable resistance, and was instrumental in the capture of the ridge. Second Lieutenant Inouye’s extraordinary heroism and devotion to duty are in keeping with the highest traditions of military service and reflect great credit on him, his unit, and the United States Army.