During our stay at Mokuleia, we took a day trip to the other side of Oahu, the Leeward side. In terms of a crow flight and even by foot, the Leeward Coast of Oahu is only a short distance from Mokuleia. We’re we to walk, we would go to Kaena Point, only a short distance from our cottage, as I described in an earlier post. From the entrance to Kaena Point on the North Shore to Yokohama Beach on the Leeward side is only about seven miles. By car, however, the distance is 48 miles, about an hour and a half.

Leeward Oahu was not a place we visited often when we lived on Oahu. We spent one weekend at Waianae, but otherwise, we seldom visited the Leeward beaches. In part, because they were hard to get to from where we lived and there were many gorgeous spots in between. I did have to visit Nanaikapono Elementary School in Nanakuli when I worked at KEEP, but that was the extent of it.

We went on March 23, 2017. It happened to be Spring Break for Hawaiian schools so there were a lot of young kids in the water. The surf was heavy at Yokohama. The flags in the picture are surf advisories warning of dangerous shore breaks. But, since so many kids were in the water, we figured, how bad could it be? The surf didn’t seem to bother them. But it sure bothered us old guys. Getting in, no problem. that first wave tumbled us over. Good thing there was lifeguard on hand to help us out. Next time, heed the surf warnings. 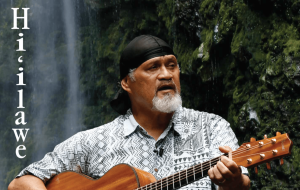 Hawaiian Slack Key Guitar virtuoso, Cyril Pahinui, son of the legendary master, Gabby Pahinui, has been honored as a 2017 National Endowment For The Arts National Heritage Fellow at the Library of Congress on September 14, according to the Honolulu Star-Advertiser . Pahinui has been in poor health lately, but he still records and performs every Wednesday at the Kani Ka Pila Grille in the Outrigger Hotel in Waikiki
Watch and listen to Cyril perform his father’s signature song, Hi’ilawe

By the end of July 1944, the Allies had retaken Italy as far north as the Arno River. The Germans were pulling back to the Gothic Line in the Appenine mountains. Another allied force had landed in France at Normandy. The allied high command wanted to put pressure on the Germans in France. On July 15, while the 442nd along with the 34th was still engaged in the Arno campaign, the Anti-tank Company was detached from the 442nd and given the mission of providing anti-tank protection for the First Airborne Task Force invasion of Southern France.

The Nisei became glider Infantry. The gliders were 48 feet long and 12 feet high motorless crafts made of metal tubes, wood and canvas. They could hold a Jeep, or a trailer load of ammunition, or a six-pound anti-tank gun. Each glider was manned by two pilots and carried four to six members of the Anti-tank Company.

Operation Dragoon, as it was called, involved three elements: The airborne paratroopers, who left first; the glider soldiers who followed with ammunition and heavier weapons, and seaborne troops. The paratroops and the Anti-tank Company were to get in quickly and set up the battlefield for the seaborne troops who would follow.

The invasion of Southern France was launched on August 15. The unarmored gliders encountered anti-aircraft fire on the way to the landing areas. At the landing areas they encountered “Rommel’s Asparagus”—ten-foot-tall wooden poles that Rommel had ordered planted in open fields to thwart glider landings. The poles were cross-crossed with barbed wire and some of them were mined. Because of the poles, pilots had to adjust their planned landings. Some of the gliders hit trees. Others experienced problems with shifting loads due to sudden changes in descent.

Nine of the anti-tank company were injured in the landings. The glider pilots suffered many casualties. The Nisei unloaded their equipment and set up their positions, which they held for two days until the seaborn troops arrived. For two months, the Anti-tank Company protected the flank of the 7th Army. They cleared mines and guarded roads and tunnels.

In October, the Anti-tank Company was reunited with the rest of the 442nd who pushed into France.

Two months after Pearl Harbor, in February 1942, Nakae joined the US Army and volunteered for the 100th Infantry. He trained at Camp McCoy and then Fort Shelby before sailing to North Africa and then Italy.

Medal of Honor Citation
The President of the United States of America, authorized by Act of United States Congress, March 3, 1963, has awarded in the name of The Congress the Medal of Honor to
PRIVATE MASATO NAKAE, UNITED STATES ARMY
for conspicuous gallantry and intrepidity at the risk of his life above and beyond the call of duty:
Private Masato Nakae distinguished himself by extraordinary heroism in action on August 19, 1944, near Pisa, Italy. When his submachine gun was damaged by a shell fragment during a fierce attack by a superior enemy force, Private Nakae quickly picked up his wounded comrade’s M1 Garand Rifle and fired rifle grenades at the steadily advancing enemy. As the hostile force continued to close in on his position, Private Nakae threw six grenades and forced them to withdraw. During a concentrated enemy mortar barrage that preceded the next assault by the enemy force, a mortar shell fragment seriously wounded Private Nakae. Despite his injury, he refused to surrender his position and continued firing at the advancing enemy. By inflicting heavy casualties on the enemy force, he finally succeeded in breaking up the attack and caused the enemy to withdraw. Private Nakae’s extraordinary heroism and devotion to duty are in keeping with the highest traditions of military service and reflect great credit on him, his unit, and the United States Army.