House Without A Key Kiawe Tree

last month I mentioned in a post that the venerable kiawe tree that forms the backdrop of the lanai stage of the Halekulani’s House Without A Key, had fallen. The hotel was making efforts to save it.  Now comes news from the Honolulu Star-Advertiser, that the tree is showing new growth. 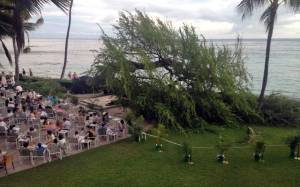 While the 2nd and 3rd battalions of the 442nd were engaged in the fight for Hill 140, the 100th was preparing to attack the town of Castellina Marittima in the province of Pisa in Tuscany. On July 7, 1944, the day Hill 140 fell, they launched the attack. They took the high ground on the northwestern side of the town. At dawn, 2nd platoon C company entered the town. They met heavy resistance and fought back numerous German counterattacks. Private First Class, Kaoru Moto, single-handedly silenced two machine gun positions and captured a German soldier. Then, while severely wounded by a sniper, he wiped out another machine gun position. Company B moved north into the town and the town, also meeting heavy resistance. The 522nd artillery laid down a heavy barrage and forced the Germans to retreat. The 100th secured the town. Between July 18 to July 20, the 2nd and 3rd battalions took the town of Pisa on the Arno River.

Near the town of Pieve di Santa Luce in the Pisa district, Staff Sergeant Otani directed his platoon to safety after being pinned down by hostile fire. He killed one sniper and then, exposing himself to machine gun fire, he created a distraction which allowed his men to reach cover. He was killed by hostile fire while attempting to save a wounded member of his platoon. Otani had volunteered for the 442nd while he and his family were interned at the Gila River Was Relocation Center in Arizona.

Staff Sergeant Kazuo Otani distinguished himself by extraordinary heroism in action on 15 July 1944, near Pieve Di S. Luce, Italy. Advancing to attack a hill objective, Staff Sergeant Otani’s platoon became pinned down in a wheat field by concentrated fire from enemy machine gun and sniper positions. Realizing the danger confronting his platoon, Staff Sergeant Otani left his cover and shot and killed a sniper who was firing with deadly effect upon the platoon. Followed by a steady stream of machine gun bullets, Staff Sergeant Otani then dashed across the open wheat field toward the foot of a cliff, and directed his men to crawl to the cover of the cliff. When the movement of the platoon drew heavy enemy fire, he dashed along the cliff toward the left flank, exposing himself to enemy fire. By attracting the attention of the enemy, he enabled the men closest to the cliff to reach cover. Organizing these men to guard against possible enemy counterattack, Staff Sergeant Otani again made his way across the open field, shouting instructions to the stranded men while continuing to draw enemy fire. Reaching the rear of the platoon position, he took partial cover in a shallow ditch and directed covering fire for the men who had begun to move forward. At this point, one of his men became seriously wounded. Ordering his men to remain under cover, Staff Sergeant Otani crawled to the wounded soldier who was lying on open ground in full view of the enemy. Dragging the wounded soldier to a shallow ditch, Staff Sergeant Otani proceeded to render first aid treatment, but was mortally wounded by machine gun fire. Staff Sergeant Otani’s extraordinary heroism and devotion to duty are in keeping with the highest traditions of military service and reflect great credit on him, his unit, and the United States Army.